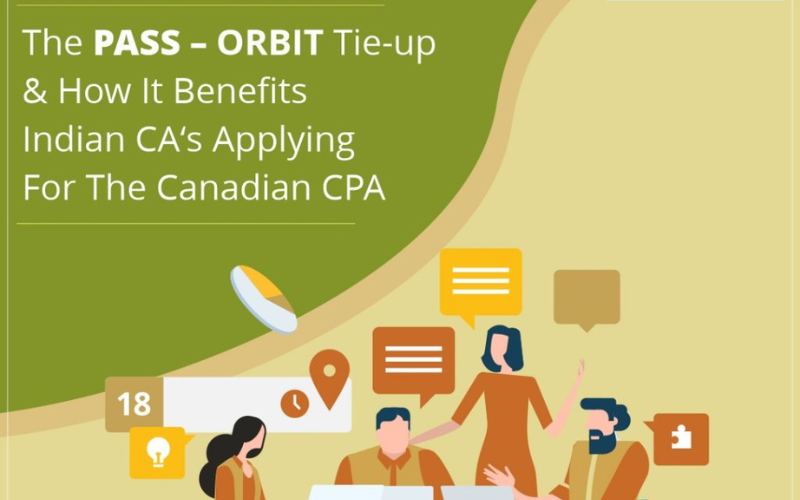 For many years now, Canada has been one of the most popular migration destinations for Indians. This is largely due to Canada’s immigrant-friendly policies and lucrative job opportunities. Since 2018, the doors of opportunity have been further opened to Indian Chartered Accountants. Canada-based, Professional Accounting Supplementary School (PASS) has tied with Orbit Institutes in India to help Indian CA’s apply for the Canadian CPA. In this article, we’ll take an in-depth look at how this arrangement works.

Who Are These People?

A global citizen and a recognised accountant in at least three countries, Krishan Sharma brought the Becker CPA Review to India in 1997. Today he runs Orbit Institutes which trains students for various accounting courses and has 12 branches across the country.

Why Have They Come Together?

In 2018, the Institute of Chartered Accountants of India (ICAI) signed a Memorandum of Understanding (MOU) with the Chartered Professional Accountants of Canada (CPA Canada) regarding reciprocal membership arrangements. This move opened up a number of employment opportunities for Indians choosing to qualify themselves to work in Canada.

PASS & Orbit have joined forces to help Indian students take advantage of this situation. In fact, Orbit Institutes is the only institute in the country to offer students the Canadian CPA course.

How Does the PASS- Orbit Program Work?

The PASS-Orbit program is designed specifically for Indian students. Lectures are delivered online & students have access to the recordings of these lectures as well. Since, the Canadian CPA is a part-time course; students have the flexibility of choosing when they wish to study. When a student registers for the course, they are given a physical binder of study material as well.

Indian students can study for the Canadian CPA while in India itself. They only need to be in Canada to write the final exam called the CFE or Common Final Exam. The CFE is usually held twice a year, in May & September.

What Advantage Does an Indian Student Gain from the PASS-Orbit Program?

The MOU between the two countries already puts Indian students at an advantage by letting them directly appear for the CFE. Canadian students on the other hand need to complete two Capstones before attempting the CFE.

The Capstones are designed to test a student’s ability to work in groups, make presentations & write case studies. Even though Indians don’t need to do them, the PASS-Orbit syllabus covers them. This ensures that Indian students are in no way behind their Canadian counterparts.

Capstone 1 is addressed in a 3 hour live session where students are given a summary of what is covered. Students are also marked on practice cases. Capstone 2 is built into the course. Those opting for this are advised to purchase additional Capstone 2 material. For those who absolutely cannot afford it, there is a cheaper program, which doesn’t cover capstones at all.

Overall the PASS-Orbit course for Indian students is far more comprehensive & economical than what is offered to Canadian students.

What Disadvantages Does an Indian Student Have When Attempting the Canadian CPA?

Indian students are required to have a basic understanding of Canadian Taxation. This is something that they may not be familiar with initially. Apart from the IFRS, they also need to be familiar with the ASPE.

In terms of the writing the exam, Indian students need to focus their practice on case- writing, which is quite different from what they may be used to studying. The PASS-Orbit course offers students a number of study-techniques to help them familiarize themselves with case-writing.

How Difficult Is It to Immigrate to Canada?

As a qualified Canadian CPA, it is not actually that difficult to immigrate to Canada. Having this degree adds points to your immigration process. Additionally, under the Federal Skills Workers Stream (FSW) a Canadian CPA is allowed express entry, which takes around 7 months to process.

Also, if you don’t want to live in Canada, keep in mind that the Canadian CPA designation is also recognized in Europe, Asia & the Caribbean.

So, are you ready to explore new horizons? If you’re still on the fence, watch this introductory video , where the founders themselves of both PASS & Orbit Institutes give you more details of what’s in store for you.

We are glad that you preferred to contact us. Please fill our short form and one of our friendly team members will contact you back.